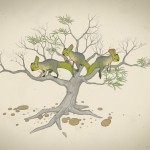 It should be noted that there are some disagreements at the level of reconstructing skeletons and musculature, and that improvements and tweaks are frequently being made. We mostly agree on the positions of muscles, for example, but the sizes of some of the muscles involved are variable in living animals and there is sometimes no reliable way of determining their size in fossil animals.
The real complication in reconstructing fossil animals is that there’s all the soft stuff that goes on top of the musculoskeletal system. Integument is the great unknown for many fossil animals; its preservation is rare and infrequent, and even when it’s preserved, it may be massively distorted or rearranged relative to its position in life. This is important, since the shape and size of the integument can radically change the appearance of the living animal relative to its underlying musculature and skelton.
We are therefore presented with a huge diversity of ‘known unknowns‘ and ‘unknown unknowns‘ – the gate is open for all manner of bizarre possibilities as goes the life appearances of fossil animals.