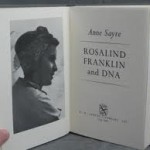 Facts have something of a life of their own. They are by no means entirely subject to viewpoint: What one likes, or does not like, does not affect what is. Facts may be annoying, they may hamper the flow of a good story, or even contradict it; but when they are swept under the rug in order to let the tale get on, they remain facts, locatable, discernible, stubborn, and there for the seeking. In one instance, and in my mind, a question arose concerning the accuracy of some of Watson‘s facts, simply because he presented in The Double Helix a character named ‘Rosy’ who represented, but did not really coincide, with a woman named Rosalind Franklin whom I had known, admired, and liked very much.
For we are presented with a picture of a deplorable situation. The progress of science is being impeded, and by what? Why, by a woman, to begin with, one labeled as subordinate, meant—or even destined—to occupy that inferior position in which presumably all women belong, even those with good brains.
But perhaps the progress of science is also being impeded somewhat by a man as well, one too inhibited by decency to be properly ruthless with female upstarts, and so to get on with the job.