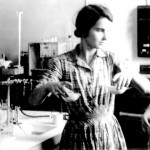 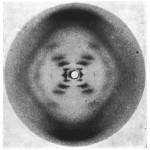 (What did Watson actually get out of Photo 51 beyond the idea that the “X” signified a helix?)  After Watson saw Photo 51, he went out to dinner with Wilkins and pressed him for the interpretation of it—the 34-angstrom measurements and so on. At that early date Watson didn’t know how to interpret a diffraction photo, other than that an “X” meant helix. In terms of getting measurements out of it, he hadn’t the foggiest—at that point. It was Wilkins who told him how to interpret it.