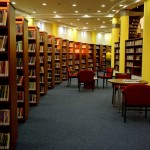 I’ll admit, to me, the idea of a privatized public library has a certain dystopian ring to it, the ultimate public space corrupted for a profit. That image was not much aided by my first (and second and third) call to Library System and Services Inc., the only library privatization company in the United States. LSSI now runs at least 15 library systems in California, Oregon, Tennessee, and Texas. This means it is, effectively, the fifth largest library system in the country.
Time and again, I ran through an automated response system without finding a real person. A week’s worth of emails went unanswered. And then, there’s the message at one of LSSI’s libraries, which directs you press two for “costumer service.”
Is this the future of the reference desk, I wondered? Not exactly the library system of my childhood, where each call about books on hold was answered by the same librarian I had known since I started attending kid’s corner book readings.