The arguments for U.S. leadership are obvious: It is still the most powerful country on earth; our national security interests and our values just happen to align in the matter of Assad, in a way that they seldom do; and the regime in Syria is populated by torture-fiends and child-rapists.
But here’s the problem: The Sunni-dominated opposition to the regime has in its ranks a growing number of stone-cold killers, and, most consequentially — at least from a public relations standpoint — at least one cannibal. 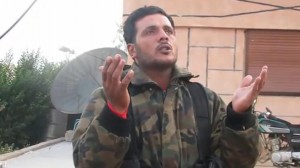 The cannibal, Khalid al-Hamad, who goes by the nom de guerre Abu Sakkar, is affiliated with one of the several al-Qaeda-influenced groups in the opposition. He has become famous for a now-viral video in which he stands over the body of a dead pro-regime fighter and cuts into the corpse’s chest with a knife. He removes what appears to be a lung. “I swear to God we will eat your hearts and your livers, you soldiers of Bashar the dog,” he shouts. Then he bites into the lung. It is not known if he eventually found his way to the heart or liver.