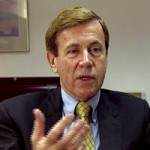 That was a tremendous coup. When the Jewish organizations entered the game on the side of the [Muslim] Bosnians, we could promptly equate the Serbs with the Nazis in the public mind. Nobody understood what was happening in Yugoslavia. The great majority of Americans were probably asking themselves in which African country Bosnia was situated.
By a single move we were able to present a simple story of good guys and bad guys which would hereafter play itself We won by targeting the Jewish audience. Almost immediately there was a clear change of language in the press, with use of words with high emotional content such as ethnic cleansing, concentration camps, etc., which evoke images of Nazi Germany and the gas chambers of Auschwitz. No one could go against it without being accused of revisionism. We really batted a thousand in full.
(But when you did this, you had no proof that what you said was true. All you had were two Newsday articles.)
Our work is not to verify information. We are not equipped for that. Our work is to accelerate the circulation of information favorable to us, to aim at judiciously chosen targets. We did not confirm the existence of death camps in Bosnia, we just made it widely known that Newsday affirmed it…. We are professionals. We had a job to do and we did it. We are not paid to moralize.