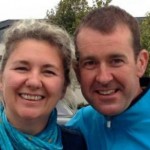 Thirty-four years ago, Emmanuelle Demeautis, then 9, was walking her dog along beach in the French coastal town of Cherbourg, when she found a message in a bottle.
The note read:
“My name is Adrian Lomas — I’m aged nine and live in England, if you find this letter please write to me.”
Demeautis did as Lomas requested, and for the next three decades, Demeautis and Lomas were penpals.
“We wrote for many years and, at one stage, we planned to meet in Tahiti but, for one reason or another, it didn’t happen.” Lomas told the Chester Leader. “However, thanks to the power of Facebook, Emmanuelle spotted that I was riding the Tour de Force and got in touch.”
Last week, 34 years after first writing to each other, the long-distance friends finally met.
“It was a really emotional meeting,” Lomas, the managing director of digital agency, Blueleaf, wrote on his blog. “We both know each other so well, both have families and are interested in similar things. Her father was a champion cyclist and her cousin is working with a cycling team. Emmanuelle and her husband write and illustrate books.”
The friends plan to meet up again — this time with their respective spouses, too — at the end of the bike tour.