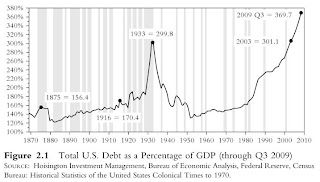 We borrowed like there was no tomorrow. And because we were so convinced that all this debt was safe, we leveraged up, borrowing at first 3 and then 5 and then 10 and then as much as 30 times the actual money we had. And we convinced the regulators that it was a good thing. The longer things remained stable, the more convinced we became they would remain that way. The chart shows how our sandpile ended up. It’s not pretty.