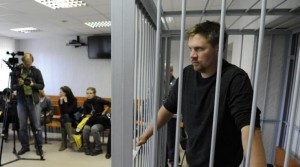 Greenpeace crew members detained in Russian jails for two months over their open-sea protest against Arctic oil drilling are “close to shock” over their conditions, a rights activist said.
The 30 detained are being held in pre-trial detention centres in the cities of Murmansk and Apatity, which are nearly 2,000 kilometres (1,250 miles) north of Moscow and above the Arctic Circle.
All but four of the activists are non-Russians from countries including Britain, the United States, Finland and Argentina.
Russia has jailed the activists from Greenpeace’s Arctic Sunrise protest ship without charge pending an investigation into alleged piracy, after several scaled a state-owned oil rig on September 18.
The activists have complained of cold cells and a lack of suitable clothing and food, said Irina Paikacheva, the head of a state-connected regional prisoners’ rights watchdog.
“Many of them are in a state close to shock,” she told AFP after visiting the prisoners. “They had never expected that they would face such consequences for their peaceful protest in a democratic state.”