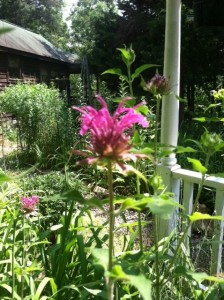 I have always believed that any plant is a “weed” until we find a use for it. Herbs, for instance, are basically just weeds. They grow in ground that hasn’t been prepared, under conditions that our pretty, hybridized show plants can’t tolerate. They are mostly drought proof, insect resistant, and deer repellent. Some of them spread like wild fire. They love benign neglect. They just happen to taste good and be good for us. But until we knew all that, they were, well, just weeds.