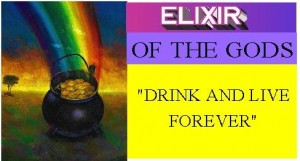 This water originates and flows from the legendary Fountain of Youth and Immortality in the “Garden Of Eden” in the Kingdom of Love and Wisdom, which is in the 5th Dimensional Earth/Worlds located at the end of the “Yellow Brick Road”.
The cost is $10.000.00 for 32 OZ Bottle. Shipping and handling included.
This product works best with the “5 magic words” diet and meditation system.