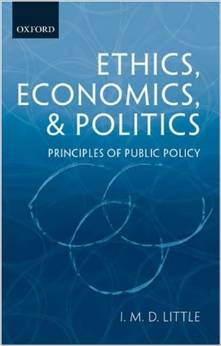 Adam Smith himself was a moral philosopher, and many economists in the nineteenth century made significant contributions to what these days would be called social ethics. The last 30 years has seen social ethics flourish in the hands of philosophers such as John Rawls, Robert Nozick, and Ronald Dworkin, often aiming to provide an ethical rationale for — or rejection of — income redistribution; among economists, the habit has lapsed. But in this short, closely written book, octogenarian English economist Little offers his mature reflections on welfare economics and on the recent efforts by philosophers to provide a solid intellectual basis for moral principles and “justice.” Little greets most of these efforts, and their attacks on utilitarianism, with a commonsensical skepticism. He maintains that any insistence on equality as a social norm needs to meet the operational requirements of precise specification and measurement.