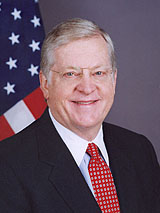 John Thomas “Tom” Schieffer was sworn in as the 27th U.S. Ambassador to Japan on April 1, 2005 and presented his credentials to the Emperor on April 11, 2005. Prior to his Jan. 15, 2009 departure from Japan, he worked to strengthen the U.S.-Japan alliance, increase trade, and facilitate the realignment of U.S. forces stationed in Japan, among other issues.
Before coming to Japan, Ambassador Schieffer served as the U.S. Ambassador to Australia from July 2001 until February 2005.
Prior to his diplomatic service, Ambassador Schieffer was an investor in the partnership that bought the Texas Rangers Baseball Club in 1989, with George W. Bush and Edward W. ‘Rusty’ Rose. He served as team President for eight years, responsible for day-to-day operations of the club as well as overseeing the building of The Ballpark in Arlington, Texas.

2 thoughts on “Embassy of the United States in Tokyo”