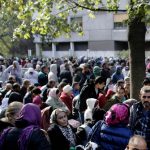 When a newly arrived migrant seeks asylum on grounds that going home would mean facing religous persecution, how can the host country test the sincerity of that claim? That is a hard question, especially if the migrant has only recently converted to a different faith. It’s also a very topical one, given the reports that hundreds of newcomers in Germany and the Netherlands have switched from Islam to Christianity. If they come from countries where apostasy from Islam incurs terrible consequences, even the death penalty, then they can make a strong case that their safety depends on finding a new home. So how can authorities tell if they have had a real change of heart or are simply looking for a new way to buttress their case?

1 thought on “The Economist”