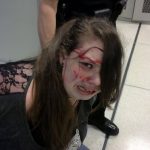 (Disabled cancer patient slammed to the ground by TSA guards)

These people think they are God. They think they can do anything they want.