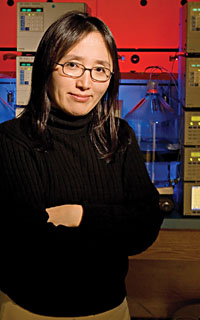 ENDOGENOUS HALLUCINOGENS: It has been proposed that exceptional states of consciousness in humans such as psychosis may involve the brain synthesis of serotonin analogs exhibiting potent psychoactive properties. One such compound, N,N-dimethyltryptamine (DMT), has been found naturally in several plants, in the bodily fluids of animals including humans, and in elevated levels in psychiatric patients. Exogenously administered DMT elicits intense visual and mental hallucinations in healthy humans. Our lab demonstrated the natural presence of DMT within the living rodent pineal gland and occipital cortex. More recently, we have begun to analyze regulatory mechanisms of endogenous DMT synthesis, secretion, and signaling. In addition, we plan to examine functional impact of exogenous DMT administration on electrical oscillations in mammalian brain. These studies will further the understanding of exceptional states of consciousness and pathophysiological mental states like schizophrenia, wherein hallucinations are reported.