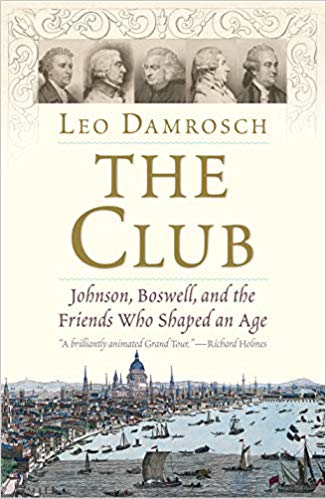 This is the story of a group of extraordinary individuals, a constellation of talent in eighteenth-century London that was known simply as the Club. Though not a large group, its members made brilliant contributions to our culture that are still celebrated today. But there was another, perhaps even more important, requirement for Club membership: you had to be good company—ready to talk, laugh, drink, eat, and argue until late into the night at the weekly meetings at the Turk’s Head Tavern. Unlike some later clubs, it had no premises of its own, but met in an ordinary London pub.
The members included Samuel Johnson, James Boswell, Edmund Burke, Edward Gibbon, and Adam Smith—arguably the greatest British critic, biographer, political philosopher, historian, and economist of all time. Others were equally famous at the time: the painter Joshua Reynolds; the playwrights Richard Brinsley Sheridan and Oliver Goldsmith; and David Garrick, the greatest actor of the century. New members could be elected only by unanimous vote.