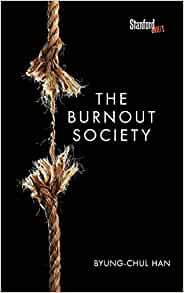 Sociopolitical events are no longer determined by the clash between ideologies or classes—the very idea has come to sound archaic. But for all that, the positivization of society does not abolish violence. Violence does not stem from the negativity of clash or conflict alone; it also derives from the positivity of consensus. Now, the totality of capital, which seems to be absorbing everything, represents consensual violence. Struggle no longer occurs between groups, ideologies, or classes, but between individuals; still, this fact is not as important for understanding the crisis of the achievement-subject as [Hans] Ehrenberg claims. What proves problematic is not individual competition per se, but rather its self-referentiality, which escalates into absolute competition. That is, the achievement-subject competes with itself; it succumbs to the destructive compulsion to outdo itself over and over, to jump over its own shadow. This self-constraint, which poses as freedom, has deadly results.