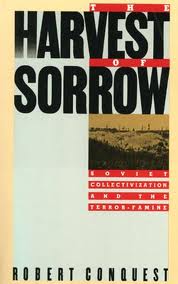 The Harvest of Sorrow: Soviet Collectivization and the Terror-Famine; Famine in the Ukraine, 1932-1933
by Robert Conquest
Two books remind the world of Stalin’s campaign against the kulaks and the drive for farm collectivization accompanied by force, terror and famine, especially in the Ukraine. Conquest’s study places these events in the context of Bolshevik politics and policy and describes the famine in grisly detail. On one of his main themes, the deliberate destruction of the independent peasantry for reasons of ideology and power, the record is indisputable; on his other theme, that the famine was an act of genocide directed against the Ukrainian nation, the case is less clear, although Ukrainian nationalism was a constant concern of the Bolshevik leadership. As the Soviet government then and later denied the existence of the famine, there is no official body of evidence on which the story can be based, but Conquest has done a masterful job in collecting material from eyewitness accounts of foreign journalists and emigrés, and also from fact and fiction published in the U.S.S.R. itself. The volume edited by Serbyn and Krawchenko, less ambitious but covering some of the same ground and with similar sympathy for the Ukrainian cause, has a useful chapter on sources. It also describes fully how the famine was often dishonestly reported to the West (especially by Walter Duranty of the The New York Times) and how the Western governments chose to close their eyes and ears.