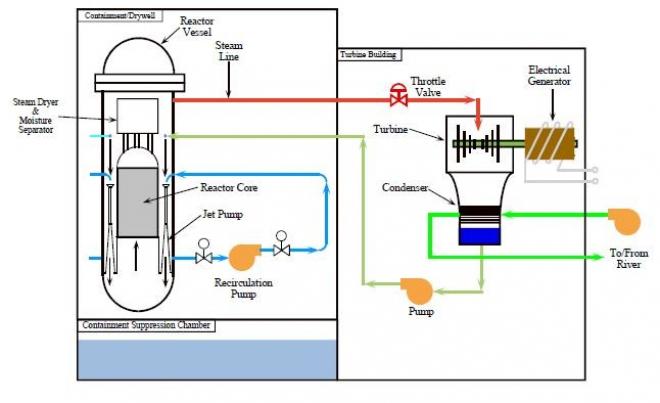 Schematic images of the disaster struck reactors of the nuclear power plant Fukushima Dai-ichi in Japan, helping to understand the various reports about explosions and fires. There are 6 reactor blocks, which are all the same pre-1970 Boiling Water Reactor (BWR) General Electric Mark I design.
A crucial weakness of nuclear reactors is their dependence on the outside electricity grid to keep the several pumps and different water circulation systems running, which in turn are vital to keep the reactor core from overheating. In the current case of a failure of both the electricity grid and the emergency power, the reactor core starts overheating and melts down, a process that started in all of the three active reactors. The damage to the fuel rods, which normally enclose the uranium oxide fuel airtight to keep radioactive nucleids from contaminating the reactor core, allowed significant amounts of these radioactive particles to escape the containment with vented gas. The crucial purpose of a number of containment layers, to keep radioactivity inside of the reactor under all circumstances, thus failed.
The hydrogen explosions were a result of the initiated meltdown, as hydrogen starts to appear when the water level in the reactor vessel drops, the fuel rods are exposed, and reach a temperature of at least 1000 degree Celsius. As an emergency measure to counter the build up of pressure inside of the reactor vessel, gas is continously vented, with the side effect of transporting significant amounts of radioactive isotopes in the atmosphere, and blowing up the roofs of two reactors in the huge explosions that occurred.