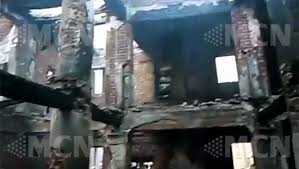 For 67 years, the Virgin Mary Church has been a peaceful refuge for Shenouda El Sayeh, much like the Giza province village of Kafr Hakim where it rests and where he has lived all those years.
But, as he swept its floors on Thursday, it was painfully obvious things had changed.
The night before, a mob — chanting against Coptic Christians such as El Sayeh and calling for Egypt to become an “Islamic state” — had torched and looted the Virgin Mary Church.
“I didn’t expect this to happen,” El Sayeh said.
He’s not alone. Christians all around Egypt are cleaning up in the aftermath of a spate of attacks, which came on the country’s deadliest day since the 2011 revolution that overthrew longtime President Hosni Mubarak.