Salernitana-Nocerina has been abandoned in Lega Pro after an extraordinary series of events.
The local derby started 40 minutes late because the Nocerina players arrived at the stadium and refused to get off the team bus.
They had reportedly received threats from their own fans before the game and were extremely nervous.
After negotiations with the Lega Pro representatives at the stadium, Nocerina agreed to play, but it only appeared to be a ruse. 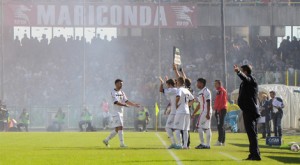 After two minutes Nocerina made three substitutions, then over the next 17 minutes another five players limped off with ‘injuries.’
Ficarrotta of Nocerina and Salernitana’s Iannarilli were also sent off for a scuffle.
This left Nocerina with only six players on the pitch, forcing the referee to suspend the game definitively.