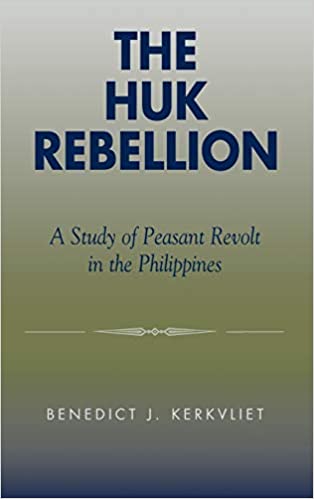 “Why peasants revolt?” is the subject of this book. In particular, the study explains the causes of the Huk rebellion, a rural uprising that raged across central Luzon in the Philippines from 1946 to the early 1950s.
Kerkvliet shows that some causes of the rebellion can be traced to adverse agrarian conditions in the 1920s. Other causes were government and landlords’ hostile responses to peasants’ organizations and increasing electoral strength in the 1930s and mid 1940s. Aspects of the Japanese occupation in the Philippines (1942-1945) were also important factors. In a concluding chapter, Kerkvliet explains how his findings differ from those of earlier writers and offers propositions relevant to peasant movements elsewhere.
Kerkvliet’s analysis combines an investigation of agrarian conditions in one province (Nueva Ecija) with an analysis of rural dynamics in central Luzon as a whole. Thus, the book interweaves a local study with a regional one. The author’s aim is to view the Huk rebellion from the standpoint of its participants and sympathizers rather than from the perspective of government officials and counter-insurgency strategists. Doing so, he argues, is essential for understanding the rebellion and makes more intelligible the actions of people who otherwise might appear irrational.