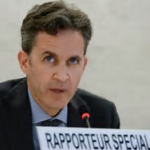 Yet across a range of areas, I learned of deep and genuine concern that trends are moving sharply and alarmingly in the wrong direction. This is especially acute in the context of media independence. Japan has well-earned pride in a Constitution that expressly protects the freedom of the press. Yet the independence of the press is facing serious threats: a weak system of legal protection, persistent Government exploitation of a media lacking in professional solidarity, and the recent adoption of the Specially Designated Secrets Act are all combining to impose what I perceive to be significant challenges especially to the mainstream media, where the vast majority of Japanese citizens get their news. Numerous journalists, many agreeing to meet with me only on condition of anonymity to protect their livelihoods, highlighted the pressure to avoid sensitive areas of public interest. Many claimed to have been sidelined or silenced following indirect pressure from leading politicians.