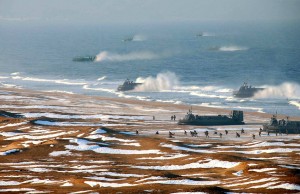 While researching a photo entry about North Korea’s recent threats of war, I discovered an image released by North Korea’s official Korean Central News Agency (KCNA) that appears to have been digitally manipulated — at least two, possibly three hovercraft appear to have been pasted into the scene of a military exercise, reportedly taking place on North Korea’s east coast on March 25, 2013. 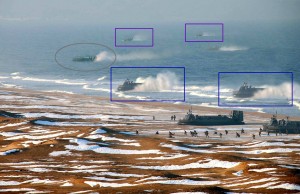 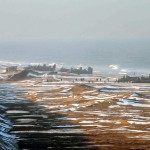 A third vehicle in the scene has some of the hallmarks of digital pasting, including color mismatch, a slight halo, and soft edges. We contacted AFP, which distributed this image from KCNA, and they have since removed the image due to evidence of tampering.