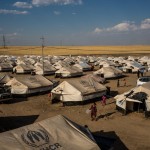 Statistics are not usually effective at depicting tragedy, which is why United Nations reports rarely generate passion. But the figures released this past week by the United Nations refugee agency offer perhaps the starkest reflection of the strife raking vast stretches of the globe.
The number of people around the world forced by conflict to flee their homes, the United Nations High Commissioner for Refugees reported, has soared past 51 million, the highest number since World War II.
Half the refugees are children; a growing number of these are on their own, according to the report. More than half of the 6.3 million refugees under the refugee agency’s care have been in exile for five years or more, testifying to conflicts that rage on and on. Most are what the United Nations refers to as “internally displaced” — people who have fled their homes but not their countries.