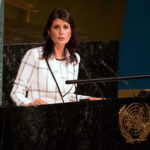 The United States withdrew from the world’s most important human rights body in protest of its frequent criticism of Israel’s treatment of Palestinians. It was the latest effort by the Trump administration to pull away from international organizations and agreements that it finds objectionable.
It was the first time a member has voluntarily left the United Nations Human Rights Council. The United States now joins Iran, North Korea and Eritrea as the only countries that refuse to participate in the council’s meetings and deliberations.