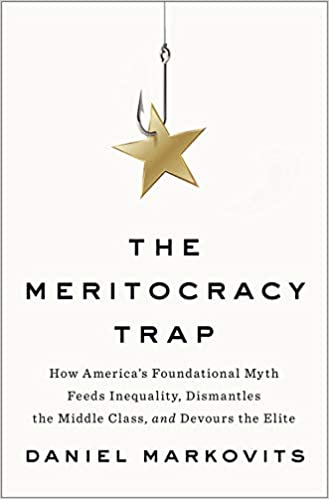 AN UNPRECEDENTED INEQUALITY
Meritocracy’s two components, having developed together, now interact as expressions of a single, integrated whole. Elaborate elite education produces superordinate workers, who possess a powerful work ethic and exceptional skills. These workers then induce a transformation in the labor market that favors their own elite skills, and at the same time dominate the lucrative new jobs that the transformation creates. Together these two transformations idle mid-skilled workers and engage the new elite, making it both enormously productive and extravagantly paid. The spoils of victory grow in tandem with the intensity of meritocratic competition. Indeed, the top 1 percent of earners, and even the top onetenth of 1 percent, today owe perhaps two-thirds or even three-quarters of their total incomes to their labor and therefore substantially to their education. The new elite then invests its income in yet more elaborate education for its children. And the cycle continues.
The sum total of elite training and industry, and of the elite labor income that meritocracy sustains, is absolutely immense. Meritocracy makes economic inequality overall dramatically worse today than in the past and shockingly worse in America than in other rich countries.