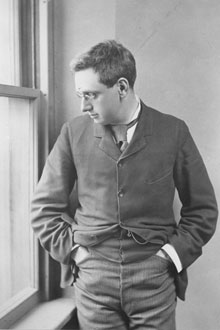 Recent inventions and business methods call attention to the next step which must be taken for the protection of the person, and for securing to the individual … the right ‘to be let alone’ … Numerous mechanical devices threaten to make good the prediction that ‘what is whispered in the closet shall be proclaimed from the house-tops.’

Left: Louis Brandeis looks out his office window, circa 1890