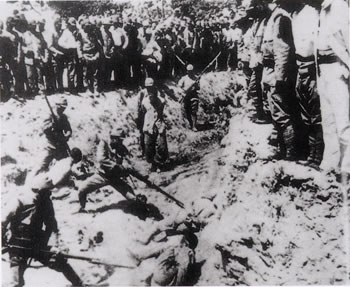 The picture shows Japanese recruits at bayonet drill in Nanjing after the capture of the Chinese capital. They are using Chinese prisoners as their targets. In the center an unfortunate prisoner (or should we say fortunate) has just received the death thrust. In the foreground, a bound Chinese is being slightly pricked with the bayonet in roder to get him into position for the coup de grace. As to the authenticity of the photo, it was sent to Look by W.A.Farmer of Hankow, who says the photograph was made by a Japanese soldier.