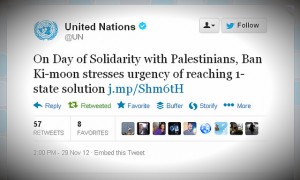 On the day of the United Nations General Assembly’s vote on upgrading Palestine to non-member observer status, the @UN official account sent out a tweet that seemed to undercut support for the move. The tweet was deleted soon after posting and a correction issued, but not before it received around 100 retweets, as well as comments and screenshots for the record.