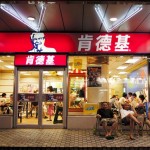 The Shanghai Food and Drug Administration told the Oriental Daily newspaper that it has launched a formal investigation and would shortly publish its findings.
KFC’s problems in China began on December 18 when CCTV, the national broadcaster, aired allegations that poultry farms in north China supplying KFC had used excessive amounts of antibiotics and growth hormones.
KFC said it would “actively co-operate” with the Shanghai authorities, and told the state-run China Daily newspaper it “strictly” abides by Chinese regulations.
It admitted that excessive amounts of antibiotics had been found in raw chicken in 2010 from two of its suppliers and that it has now terminated a contract with Liuhe, one of China’s biggest poultry companies.
McDonald’s, which also bought meat from Liuhe, terminated its contract on December 19.
Nevertheless, CCTV said: “KFC’s control and management over food safety cannot be trusted completely by customers”.
Meanwhile, Shanghai and Beijing have both vowed to blacklist food companies which breach regulations, as the Chinese authorities try to reassure the public that their food is safe.