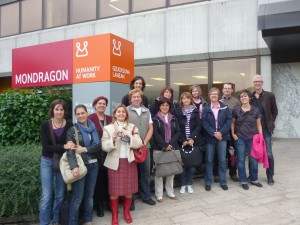 The MONDRAGON Corporation is a corporation and federation of worker cooperatives based in the Basque region of Spain. Founded in the town of Mondragón in 1956, its origin is linked to the activity of a modest technical college and a small workshop producing paraffin heaters. Currently it is the seventh largest Spanish company in terms of asset turnover and the leading business group in the Basque Country. At the end of 2010 it was providing employment for 83,859 people working in 256 companies in four areas of activity: Finance, Industry, Retail and Knowledge. The MONDRAGON Co-operatives operate in accordance with a business model based on People and the Sovereignty of Labour, which has made it possible to develop highly participative companies rooted in solidarity, with a strong social dimension but without neglecting business excellence. The Co-operatives are owned by their worker-members and power is based on the principle of one person, one vote.