Darling, who is from Kansas City, Missouri, said she was devastated when she realized she’d lost her ring.
She almost never takes it off, but it was giving her a bit of a rash so she did, zipping it in her coin purse for safe keeping.
Later, she absentmindedly emptied the contents of that purse into the collection cup of Billy Ray Harris, who is homeless and often stays under a bridge in Darling’s hometown.
It wasn’t until the next day that she realized her ring was gone. 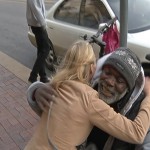 “It was horrible. It was such a feeling of loss,” Darling said. “It meant so much to me beyond just the financial value.”
She went back to look for Harris, but he was gone. She returned the next day and found him.
“I asked him … ‘I don’t know if you remember me, but I think I gave you something that’s very precious to me,’ and he says, ‘Was it a ring? Yeah, I have it, I kept it for you,'” Darling said.
She was floored.

To show their appreciation, Darling and her husband set up an online fundraiser for Harris. The donations and praise have poured in.
CNN affiliate KCTV caught up with Harris and asked him how he felt about all the attention he’s attracted since returning the ring.
“I like it, but I don’t think I deserve it,” he said.
“What I actually feel like is, ‘what has the world come to when a person who returns something that doesn’t belong to him and all this happens?'” Harris said.
But for her part, Darling said she is just grateful for what he did. Many others, she said, would have kept the ring, or sold it.