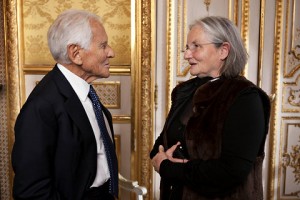 The story is based on a two-year period when François Mitterrand, then president of France, hired a personal cook, ruffling the feathers of the official in-house Elysée chef.
In 1988, Mr. Mitterrand had just been re-elected for another seven years and began his new term by proclaiming in front of an adviser: “I want a woman from the country in my kitchen!”
The search led to a recommendation by the Michelin-starred chef Joël Robuchon: Danièle Mazet-Delpeuch, a cook from the Périgord region, who had founded Foie Gras Weekend, a pioneering class teaching the region’s cuisine, as well as creating the École d’Art et Tradition Culinaire du Périgord, the area’s first cooking school, and opening a restaurant in her home.
She was whisked to the Elysée where she was told that a high-level man in government needed a cook. When she found out who it was, she said she simply accepted then and there. The story of the next two years cooking for a president who had a passion for gastronomy is recreated in the film, with Catherine Frot as Ms. Mazet-Delpeuch and Jean d’Ormesson, a novelist and member of the Académie Française, playing the former president, in his first film role at age 87.