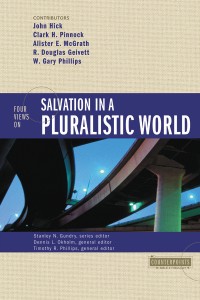 Religious pluralism is the greatest challenge facing Christianity in Western culture today. The belief that Christ is the only way to God is being challenged, and increasingly, Christianity is seen as just one among many valid paths to God.
In Four Views on Salvation in a Pluralistic World, four perspectives are presented by a major advocate of each:

This book allows each contributor to not only present the case for his view, but also to respond to the critiques of the other contributors and to critique their views in turn.