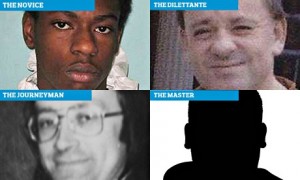 They are classified as novices, journeymen, dilettantes or masters. They are Britain’s hitmen – killers who ply their deadly trade in return for cash, and who for the first time have become the subject of a major academic study.
Using off-the-record interviews with informants, interviews with offenders and former offenders, court transcripts and newspaper archives, academics from Birmingham City University identified patterns of hitman behaviour in an attempt to demystify their secret world.
The reality of contract killing in Britain tended to be striking only in its mundanity. Far from the media portrayal of hits being conducted inside smoky rooms, frequented by members of an organised crime gang, British hits were more usually carried out in the open, on pavements, sometimes as the target was out walking their dog, or going shopping, with passersby watching on in horror.
The average cost of a hit was £15,180, with £100,000 being the highest and £200 the lowest amount paid. The average age of a hitman was 38 with the youngest aged 15 and the oldest 63.