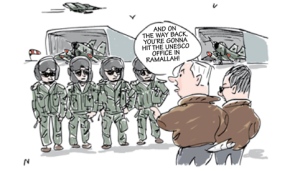 When he met with Eric Falt, UNESCO’s assistant director general for external relations and public information, Ambassador Nimrod Barkan was stunned to be handed a copy of this cartoon and an official letter of protest from UNESCO’s director general, Irina Bokova. Falt told Barkan the cartoon constituted incitement.
“A cartoon like this endangers the lives of unarmed diplomats, and you have an obligation to protect them,” Falt said, according to an Israeli source. “We understand that there is freedom of the press in Israel, but the government must prevent attacks on UNESCO.”
Barkan pointed out that the government has no control over editorial cartoons printed in the papers. “Ask yourselves what you did to make a moderate paper with a deeply internationalist bent publish such a cartoon,” he suggested. “Perhaps the problem is with you.”