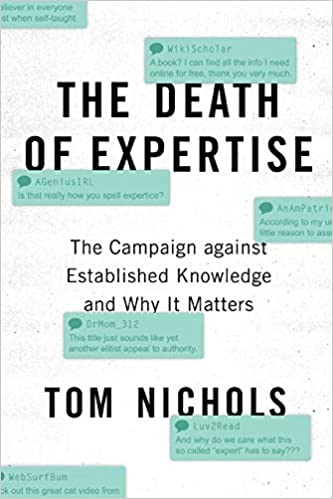 All of these choices, from a nutritious diet to national defense, require a conversation between citizens and experts. Increasingly, it seems, citizens don’t want to have that conversation. For their part, they’d rather believe they’ve gained enough information to make those decisions on their own, insofar as they care about making any of those decisions at all.
On the other hand, many experts, and particularly those in the academy, have abandoned their duty to engage with the public. They have retreated into jargon and irrelevance, preferring to interact with each other only. Meanwhile, the people holding the middle ground to whom we often refer as “public intellectuals”— I’d like to think I’m one of them— are becoming as frustrated and polarized as the rest of society.
The death of expertise is not just a rejection of existing knowledge. It is fundamentally a rejection of science and dispassionate rationality, which are the foundations of modern civilization.