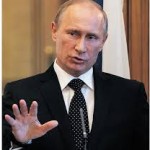 After a meeting in London on Sunday with the prime minister, Mr. Putin responded in combative style after being asked if he had blood on his hands for providing military support to the Assad government.
“One hardly should back those who kill their enemies and, you know, eat their organs,” he said, referring to a widely publicized video in which a member of an anti-Assad militia appears to bite an internal organ from a dead government soldier.
“Do we want to support these people?” Mr. Putin asked. “Do we want to supply arms to these people?”