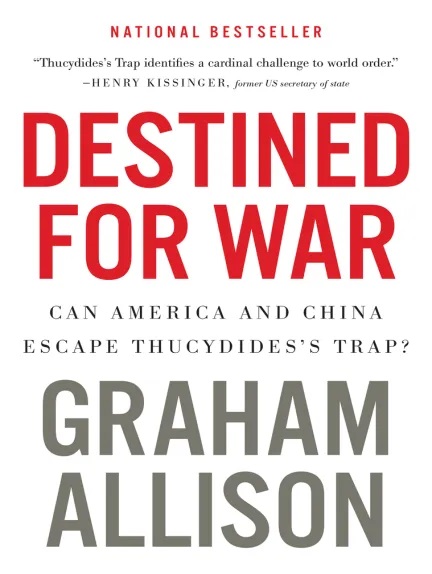 In the most frequently cited one-liner in the study of international relations, the ancient Greek historian Thucydides explained, It was the rise of Athens and the fear that this instilled in Sparta that made war inevitable.
Thucydides wrote about the Peloponnesian War, a conflict that engulfed his homeland, the city-state of Athens, in the fifth century BCE, and which in time came to consume almost the entirety of ancient Greece. A former soldier, Thucydides watched as Athens challenged the dominant Greek power of the day, the martial city-state of Sparta. He observed the outbreak of armed hostilities between the two powers and detailed the fighting’s horrific toll. He did not live to see its bitter end, when a weakened Sparta finally vanquished Athens, but it is just as well for him.
While others identified an array of contributing causes of the Peloponnesian War, Thucydides went to the heart of the matter. When he turned the spotlight on the rise of Athens and the fear that this instilled in Sparta, he identified a primary driver at the root of some of history’s most catastrophic and puzzling wars. Intentions aside, when a rising power threatens to displace a ruling power, the resulting structural stress makes a violent clash the rule, not the exception. It happened between Athens and Sparta in the fifth century BCE, between Germany and Britain a century ago, and almost led to war between the Soviet Union and the United States in the 1950s and 1960s.
Like so many others, Athens believed its advance to be benign. Over the half century that preceded the conflict, it had emerged as a steeple of civilization. Philosophy, drama, architecture, democracy, history, and naval prowess—Athens had it all, beyond anything previously seen under the sun. Its rapid development began to threaten Sparta, which had grown accustomed to its position as the dominant power on the Peloponnese. As Athenian confidence and pride grew, so too did its demands for respect and expectations that arrangements be revised to reflect new realities of power. These were, Thucydides tells us, natural reactions to its changing station. How could Athenians not believe that their interests deserved more weight? How could Athenians not expect that they should have greater influence in resolving differences?
But it was also natural, Thucydides explained, that Spartans should see the Athenian claims as unreasonable, and even ungrateful. Who, Spartans rightly asked, provided the security environment that allowed Athens to flourish? As Athens swelled with a growing sense of its own importance, and felt entitled to greater say and sway, Sparta reacted with insecurity, fear, and a determination to defend the status quo.
Similar dynamics can be found in a host of other settings, indeed even in families. When a young man’s adolescent surge poses the prospect that he will overshadow his older sibling (or even his father), what do we expect? Should the allocation of bedrooms, or closet space, or seating be adjusted to reflect relative size as well as age? In alpha-dominated species like gorillas, as a potential successor grows larger and stronger, both the pack leader and the wannabe prepare for a showdown. In businesses, when disruptive technologies allow upstart companies like Apple, Google, or Uber to break quickly into new industries, the result is often a bitter competition that forces established companies like Hewlett-Packard, Microsoft, or taxi operators to adapt their business models—or perish.
Thucydides’s Trap refers to the natural, inevitable discombobulation that occurs when a rising power threatens to displace a ruling power. This can happen in any sphere. But its implications are most dangerous in international affairs. For just as the original instance of Thucydides’s Trap resulted in a war that brought ancient Greece to its knees, this phenomenon has haunted diplomacy in the millennia since. Today it has set the world’s two biggest powers on a path to a cataclysm nobody wants, but which they may prove unable to avoid.