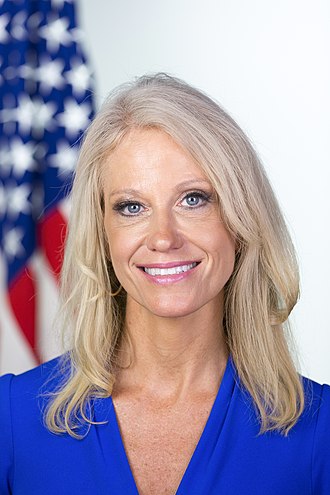 “Alternative facts” was a phrase used by U.S. Counselor to the President, Kellyanne Conway, during a Meet the Press interview on January 22, 2017, in which she defended White House Press Secretary Sean Spicer’s false statement about the attendance numbers of Donald Trump’s inauguration as President of the United States. When pressed during the interview with Chuck Todd to explain why Spicer would “utter a provable falsehood”, Conway stated that Spicer was giving “alternative facts”. Todd responded, “Look, alternative facts are not facts. They’re falsehoods.”
Conway’s use of the phrase “alternative facts” for demonstrable falsehoods was widely mocked on social media and sharply criticized by journalists and media organizations, including Dan Rather, Jill Abramson, and the Public Relations Society of America. The phrase was extensively described as Orwellian, particularly in reference to the term doublethink. Within four days of the interview, sales of George Orwell’s novel Nineteen Eighty-Four had increased 95-fold, which The New York Times and others attributed to Conway’s use of the phrase, making it the number-one bestseller on Amazon.com.
Conway later defended her choice of words, defining “alternative facts” as “additional facts and alternative information”.